Majd Darwich moved his family from Syria to Canada in 2016, hoping to find a safe place for his son, who is autistic and non-verbal. But he is now considering leaving after his son was Tasered during an interaction with Peel Regional Police a week ago.

“When I came to Canada, I thought the police would protect him and help him if he ran away from my home. I never imagined they would do what they did,” Darwich said. in an interview with CP24.com.

The 65-year-old father is referring to an incident a few blocks from their Mississauga home last Friday that saw Peel police use a Taser on his 19-year-old son, which left him injured and traumatized.

Darwich found nothing wrong that day until he heard the sound of police sirens and cruisers passing by his house. He went to see his son, who he thought was in his room. Darwish found it empty. Worried, he searched the house, but he couldn’t find it. When he checked the front door, which was usually locked to prevent Abdullah from wandering outside, he found it unlocked.

Darwish knew something was wrong. He got out and found a police scene 10 houses away from them. So he got in his car and checked what was going on.

What he saw when he arrived, Darwich said, was something a father shouldn’t see.

Her son Abdullah was on the ground, his face bloodied and his hands cuffed behind his back.

“I felt like I was going to have a heart attack,” he said.

Darwich said when he looked at his son, he begged for help.

“I felt he wanted me to hug him at least because he feels comfortable when I hug him,” he said.

Darwich tried to get closer to his son, but he said the officers didn’t allow him.

“I couldn’t because they were preventing her from touching him. It was very terrible,” he said. “I don’t think a father can handle this situation.”

Darwich says police told her her son had fallen and his injuries were not serious. He will soon learn that his son Abdullah was Tasered when he saw probes removed from his body by paramedics.

Abdullah was taken to hospital and later handed over to his father.

Abdullah Darwich waits in a hospital after being injured during an interaction with Peel Regional Police. (Provided)

“It was a terrible situation,” Darwich said, adding that the incident left her son shocked and confused.

CP24 contacted Peel Police about the incident. In a statement, they confirmed they received a call for a suspicious person “in a state of undress, attempting to enter a vehicle and a home”.

Police said at the time that responding officers did not know the person’s identity and condition.

Officers attempted to contact the person “who appeared to be in distress”, but the individual did not respond, police said.

“The individual was apprehended and taken to hospital for medical attention and support following the use of a conductive energy weapon (or Taser),” police said.

They added that the incident was under review.

To figure out what led to the incident, Darwich says he returned to the scene a day later and spoke to neighbors about what they saw.

Neighbors, he said, told him his son Abdullah was only wearing shorts and playing on a pile of leaves when the police arrived. CTV News Toronto has obtained a video that appears to show Abdullah playing with leaves. 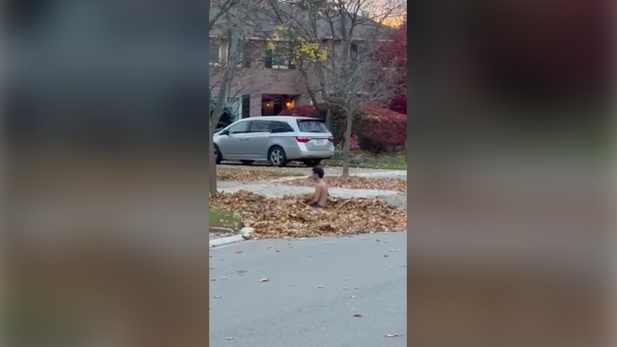 Abdullah Darwish is seen in this image. (provided)

Darwich says others have corroborated what police said in the statement, saying her son tried to break into a car.

While he believes his son tried to open a car because he was cold, Darwich says what the police did was still unacceptable.

“They don’t know anything about autism,” he said. “They treat everyone in front of them like a criminal, which is very dangerous.”

Darwich says his son is only 170 centimeters tall and thinks the police could have dealt with him without using a Taser.

He adds that Abdullah is on the Peel Police Vulnerable Persons Registry. According to the Peel Police website, the register “allows carers and/or parents of vulnerable people to submit vital information which will be used by emergency services during a crisis situation”.

Among the information requested is a photo of the individual and “methods of approach if found”. This is why Darwich is puzzled as to why the police did not use the register during the incident. He says he asked officers who visited the family a few days later why they hadn’t checked the registry.

The police told him they couldn’t tell him why.

In a separate statement, Peel Police confirmed that Abdullah is on the registry.

“The registry is only effective if this known information is provided to us. For example: if we answered the person’s address, or if the caller provided the person’s name, or simply mentioned that it might be them, then responding agents would be alerted to specific vulnerabilities and how to solve them. That was not the case in this incident,” police said.

They also confirmed that his Divisional Mobilization Unit (DMU) had visited the family’s home “to offer support”. They said the DMU connects people to immediate resources “to improve their quality of life and reduce unnecessary police interactions.”

“Our DMU team has since met with the family and is working with our community partners to ensure they are properly connected,” police said.

A week after the incident, the family is still shaken. Darwich says he has noticed changes in his son.

Before, Abdullah was friendly with people, but now he is distant and scared, Darwich says.

“He’s very different,” he said. “I hope it doesn’t stay like that.”

As for his next move, Darwich says he plans to file a lawsuit to hold those responsible for the physical and emotional injuries his son suffered.

“I have to raise my voice. I won’t leave it like this,” Darwich said.

“This boy is the most important thing to me,” he added. “He needs me and he needs me to protect him.”

Winnipeg’s next mayor loves jazz, hates putting on Christmas lights and plans to raise your taxes

How we found 600 cases of police violating people’s rights